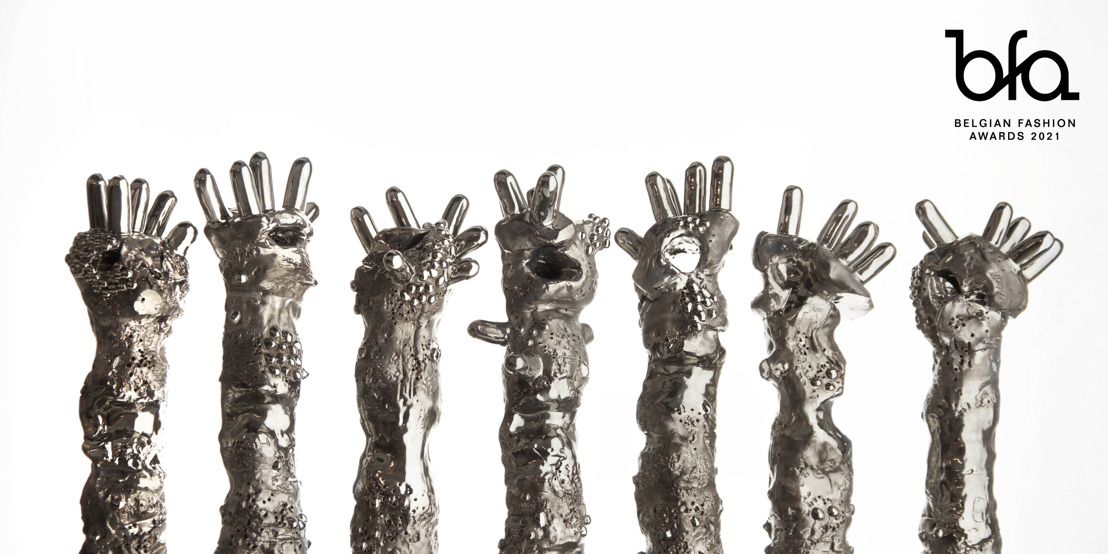 To close the successful and sold-out Fashion Talks event organised by Flanders DC, the Belgian Fashion Awards will be presented for the fourth time on Thursday, 25 November. It was originally launched to put the Belgian fashion scene in the spotlight. It both celebrates and highlights those who work behind the scenes and provides a stage for lesser-known names and new talent.

The 14-member international jury presided over by jury chairman Chris Dercon, who is president of the Grand Palais in Paris, handed out no less than seven awards. Besides the Belgian art historian, the jury also included fashion designer Christian Wijnants (BE), Pascale Mussard (FR), and Vena Brykalin of Vogue Ukraine.
The awards themselves this year are a creation of the Antwerp designer and ceramist Wouter Hoste. Each winner will receive a unique copy.

This year's Jury Prize goes to fashion designer Walter Van Beirendonck. The international jury praised the Belgian designer for his influential and social contributions that he translates into his designs. His influence extends across generations.

'Walter Van Beirendonck appeals to an international audience. In particular, his designs give his views on politics, gender, and equality a voice even in Covid times. He was present more than ever before on the international scene in the last two years,' concluded the jury's verdict.

The Designer of the Year award goes to the 38-year-old Nicolas Di Felice, the new man at French fashion house Courrèges. After graduating from the La Cambre in Brussels, he gained experience under Nicolas Ghesquière at Balenciaga and Louis Vuitton. His first autumn-winter collection was met with international applause.

The jury praised him for the 'unlikely and brave work he has done over the last two years. It's not easy to take over a fashion house that has a strong imprint and give it your own flair.'

And young fashion designer Meryll Rogge received the Emerging Talent of the Year award because of her aesthetic and challenging way of working. The jury's decision was unanimous:

'It's been a long time since we've seen such a success story for someone so young. Not only does she already have a distinct style, she continues to challenge herself.'

In addition to a €5,000 prize, the Fashion & Lace Museum of Brussels is purchasing a silhouette of her for their permanent collection.

Belgian art director, stylist and photographer Benoit Bethume was awarded the Professional of the Year prize.

'In addition to his creative contribution, he is one of the rare critical voices in the fashion industry,' the jury said.

A Changemaker from the fashion industry will also be celebrated for the first time. This category was created to give a voice to someone who influences the industry in an innovative way. This honour was given to Resortecs. The young Brussels-based company looks to contribute to a world in need of innovative solutions. They do this by taking an industrial approach to the recycling process, which includes the development of a high-tech easy-to-recycle yarn.

The Liège fashion brand Imprévu, founded by Justine God in 2016, walked away with the Audience Award for Fashion Brand of the Year. Lili Schreiber, who received her master's degree from the Brussels institute La Cambre earlier this year, is awarded the prize for Promising Graduate. And finally, fashion label Bernadette wins the UPR award from the eponymous PR and communications agency. They can count on their professional assistance for one year.

All winners at a glance

Pictures of the winners can be found at the following link.

About the Belgian Fashion Awards

The Belgian Fashion Awards have been organised annually since 2017 by the organisations Flanders DC, MAD Brussels, Wallonia-Brussels Design Mode (WBDM), and the magazines Knack Weekend and Le Vif Weekend. These awards were created to highlight the reputation, creativity, and diversity of Belgian fashion both at home and abroad. We also want to pay attention here to those who work behind the scenes and provide a stage for lesser-known names and new talent. Annually, the awards are a stimulus to celebrate Belgian fashion, meet each other, and deepen ties across the creative sector. Besides being surreal, modest, industrious, avant-garde, and no-nonsense, the organisers show that Belgian fashion also stands for independence, personality, and sustainability. At the Belgian Fashion Awards, we give a voice to the Belgian fashion industry, which is usually humble. www.belgianfashionwards.be

Flanders District of Creativity (Flanders DC) is the single point of contact for entrepreneurs in the creative industries in Flanders. Flanders DC actively informs, promotes and inspires creative entrepreneurs who want to build or grow their business. Return on creativity is what we’re after.